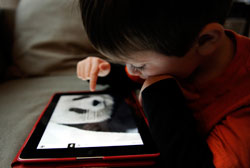 If we want our children to become saints, they will need to hear the call of God — a vocation to holiness that applies to all of us. But how will they be able to hear that call if their lives are full of noise?

In our digital age, young people have more noise and distractions in their lives than their parents had when they grew up with just TV and radio. A recent study by the American Academy of Pediatrics found that that average 8- to 10-year-olds spend nearly eight hours a day with a variety of media — internet, cell phones, computer, video games and mobile media devices — and older children and teens spend more than 11 hours per day with media. The study shows that 70% of children and teenagers report having a TV in their bedroom.

New technology and social media have affected people of all ages. We’ve all seen a family in a restaurant with mom, dad and kids each gazing at his or her phone or gaming device rather than engaging in conversation. Or people walking or driving, head down, checking and sending texts on their devices. Many of us probably have noticed a phone conversation partner suddenly become distant — because the person on the other end is answering an email. Many of us have felt a strong attraction to return again and again to Facebook or Twitter throughout the day, not wanting to miss out on “what’s going on.”

But while the attraction of gadgets is equally strong for older and younger generations, the danger for the young is that they may never know how to get along without electronic connections.

A January 2010 Nielsen study found that the average teenager sends over 3,000 text messages a month. MIT professor Sherry Turkle says in her 2011 book Alone Together that young people prefer texting because they needn’t become too personally involved, as they would in a phone conversation.

Turkle describes her book as a study of “how we are changed as technology offers us substitutes for connecting with each other face-to-face.”

“As we instant-message, e-mail, text, and Twitter, technology redraws the boundaries between intimacy and solitude,” Turkle wrote. “Sometimes people experience no sense of having communicated after hours of connection …. In all of this, there is a nagging question: Does virtual intimacy degrade our experience of the other kind and, indeed, of all encounters, of any kind?”

My Space for God

Pope Francis certainly thinks that’s a possibility. While acknowledging many benefits of new media and calling the internet a “gift from God, the pope also wrote in his Message for the 48th World Day of Social Communications, “The desire for digital connectivity can have the effect of isolating us from our neighbors, from those closest to us… It is not enough to be passers-by on the digital highways, simply ‘connected’; connections need to grow into true encounters.”

One might argue, too, that the desire for “digital connectivity” keeps us from the ultimate encounter in life — with God, in private prayer, at Mass, the Eucharist and the sacraments. Is the noise of technology and digital networking pushing God out of the space in our lives? Do we neglect solitude and inner quiet, two prerequisites for hearing God speak to us in prayer or in contemplative reading of Scripture?

Popular blogger Matt Warner recently wrote on The Radical Life blog that he realized that he was filling idle moments of his day by checking email, TV channel-surfing, trying out new apps on his phone and other distractions, rather than being present to other people and to God.

“Were these idle habits really helping me decompress, accomplish more tasks or be more efficient? Actually, they were doing the opposite,” wrote Warner, a husband and father of four. “What I really needed was rest — not distraction. I needed silence — not stimulation. I needed a moment to take a deep breath and contemplate my existence — what I’m doing and where I’m going.”

He took the radical step of leaving Facebook. For a new media Catholic writer, Warner’s move seemed almost sacrilegious. But, he said, “hidden in the celebration of [Facebook’s] greatness, I believe, is a long list of even greater things you didn’t do because you were too busy on Facebook,” he wrote. “What if the next time I have two minutes at a traffic light, instead of checking Facebook, I say a prayer to the God of the universe? … What if when I have 30 minutes before bed, instead of checking Facebook, I read a spiritual masterpiece that changes my life? … What if the next time I meet somebody new, instead of immediately looking them up on Facebook when I get home, I embrace the adventure and mystery of getting to know somebody new by actually spending time with them?”

So what’s a parent to do?

“The fact is that anything that is good, anything that is engaging can also be addictive. And the media is no different,” said Eugene Gan, author of Infinite Bandwidth: Encountering Christ in the Media and a professor at Franciscan University in Steubenville. “So the two things are: modeling good behavior and moderation. That’s what I do with my sons, whether it’s online or video games.”

Gan, who insists that we not throw the baby out with the bathwater, says Christians can and should use new technology for good purposes. If technology is distracting you from prayer, the problem is lack of formation by parents, not the technology itself.

Teaching children mindful, rather than mindless, use of social media also is necessary, said Karee Santos, a mother of young children who writes a blog about marriage. “Kids can evangelize through social media, too,” she said. “The teenagers involved in Generation Life spread prolife messages via social media, for example. Even younger kids can set a good example. When my 8-year-old daughter Maria wrote a school essay on abortion, I copied it and posted it on my blog. She was thrilled that so many people saw it and liked it.”

Santos insists that television and telephone can be just as distracting and just as harmful to one’s spiritual life. It’s up to the person to set limits and priorities, and to remain faithful to a daily appointment with the Lord in prayer time. “

My kids complain sometimes when I go on the computer or smartphone too much when they’re around, and I’m glad they call me on that,” she said. “I try to institute a no-electronics time between 3 and 5 in the afternoon so we can talk and do homework together without distractions. I also like to alternate after-dinner time between a night when we read out loud and a night when we watch TV together.”

In a similar vein, MIT’s Turkle recommends families designate “sacred spaces,” such as the kitchen and dining room, where tech gadgets are banned, so parents and children can talk and interact.

Santos maintains that parents’ policies don’t have to be all or nothing. “Limiting kids’ access to technology won’t work forever. What we really need to do is teach them to control themselves and manage their own tendencies to get distracted,” she said. “A lot of that is by example, of course.”