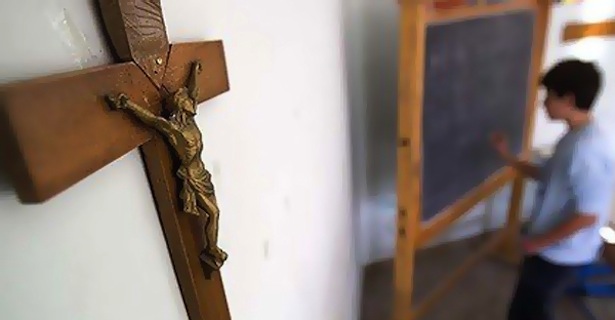 We are now in the Fortnight for Freedom — a two-week period the U.S. bishops have set aside for Catholics to appreciate our God-given right to religious freedom, the “first freedom” affirmed by the Bill of Rights. Our First Amendment freedoms are endangered in a myriad of ways today, and the threats to Catholic schools are greater than many realize. While the immediate risk to their freedoms may seem to be primarily from radical sexual activists, this public spectacle is simply an indicator of a deeper threat within.

The Spectacle of Sexual Radicalism

In the year since the landmark U.S. Supreme Court ruling legalizing same-sex marriage, the spectacle of cultural and familial disintegration has exploded. Rather than mollifying radical sexual activists and their government enforcers, the Court’s decision has only emboldened them.

The Obama administration is threatening schools and colleges, forcing them to accept a radical gender ideology. Legislators in the state of California have jumped on board with an effort to remove legal protections for faith-based colleges and promote “LGBTQ…” activism.

In Canada and Europe, Catholic teachers and clergy who promote Church teaching on human sexuality find themselves under investigation and possible termination, or even criminal indictment. There is fear that the United States is not far behind.

Intense social pressure and moral confusion have resulted in Catholic schools, even when not yet directly compelled by the states, to freely employ teachers suffering from gender dysphoria who cannot model a healthy and integrated life to their students. Or to admit students with gender dysphoria and encourage their self-deception. These are disturbing and dramatic events.

There is growing fear that if Catholic schools are seen as discriminating against sexual radicalism, they might be sued or might lose government funding such as vouchers, services for students with exceptionalities, scholarships for the needy, textbooks, transportation or other services. There is also growing concern that private groups such as accrediting agencies and sports organizations might refuse to interface with Catholic schools if they are seen as discriminating against same-sex attracted individuals or those suffering gender dysphoria.

A first defense against such charges is to emphasize that private schools have always been able to limit their enrollment to those who support the particular mission of the school. If Catholic schools are clear that they function as instruments of salvation and evangelization within the Catholic Church, they are likely to weather the storm. Under this understanding, they welcome all students, including the same-sex attracted and those with gender dysphoria, as long as they agree to abide by Catholic moral and cultural norms and sincerely desire to participate in the school’s salvific and evangelical mission. In so doing, and as a condition of enrollment, such students agree not to advocate for or participate in activities contrary to Catholic moral norms — such as same-sex romantic activity or seeking a gender identification not in accord with their biological sex.

Nevertheless, it is possible that eventually the government, an accrediting agency or a sports association may insist that Catholic schools treat students according to the dictates of that person’s individual desires and not according to reality or the school’s Catholic understanding of the best interests of the student. If this comes to pass, Catholic schools must be prepared to do without government funding and, if necessary, to form their own Catholic/Christian accrediting and sports organizations.

What Catholic schools cannot do, as faith-based academic communities committed to the truth, is actively assist or encourage the young students for whom they are responsible to behave in a manner which is not in accord with the truth or with God’s plan for humanity. There are no doubt some spectacular battles looming ahead along these lines.

An Even Bigger Battle Underway

However, it is important to realize that Catholic schools are also in an even bigger battle for our children’s hearts and minds and for religious freedom. These battles with sexual radicalism are symptoms and skirmishes of a larger battle related to the nature of truth itself.

The moral relativism gripping much of our Catholic youth is witnessed by their belief that there is nothing wrong with sexual radicalism as practiced by those experiencing same-sex attraction or gender dysphoria. Catholic youth seem to mirror the fundamental belief of our culture that the only thing that one can call wrong is any sort of binding moral truth. Their moral befuddlement leaves them not only unable to evangelize but perhaps even unwilling to evangelize — “Who is to say one religion is better than another?”

What Is the Truth?

If Catholic schools cannot confidently answer this question — if they cannot get this right — then what is the use of having them?

Catholics affirm that the Truth was made incarnate in the person of Jesus Christ. To know Him is to know the truth. On a more philosophical level, Catholics also understand the truth to be when the mind is in accord with reality. The Church believes that all reality comes from a loving God who has given it value and meaning according to His will and plan. Catholic educators, then, look to the reality of God’s creations — plant, animal or person — and ask: What is the God-given nature and value of this thing before me?

Both natural reason and divine revelation reveal that things have varying intrinsic value and worth. A plant is of different worth and value than a person. Persons have freedom and dignity and are loved by their Creator for their own sake. They are “endowed by their Creator with certain unalienable Rights, that among these are Life, Liberty and the pursuit of Happiness.”

This is not the view of reality or truth now common in our secular culture. Our culture preaches a radical relativism which ultimately destroys these concepts. It holds that it is the elite and those with power in our society who create all human values and notions. These abstract values are seen as simply useful human constructs, not unalienable eternal truths about the human person stemming from a divine creator.

Such radical relativism goes further to destroy authentic choice, since it cannot provide a transcendent basis on which to choose one thing, such as kindness, over another, such as cruelty. It also destroys any real concept of progress since it cannot provide a basis to suggest that any human course or state — such as slavery vs. non-slavery or justice vs. injustice — is more or less right or wrong, other than the fact that it reflects the will and tastes of the powerful.

This radical relativism, of which the human sexuality dramas are a part, is the greatest threat to our students and both their individual and our collective freedom. This freedom-destroying relativism is in the culture, it is in the government and it is in our children. This is the battle for their souls and the foundations of a free society. This is the real battle for religious freedom and all of our freedoms. This is the battle Catholic schools must fight.

We must proclaim and witness to our confidence in Christ and the power of the Gospel. The Church expects its schools to play a critical role in this public proclamation. The lay Catholics now teaching and running most Catholic schools must re-orient themselves to the school’s mission. Their mission is twofold, it is clear and it requires and ultimately secures authentic human freedom; both Pope Pius XI and Vatican II emphasize that Catholic schools exist to ensure:

The final good of the students is eternal life in heaven with God, which they will attain by knowing, loving and serving Him in this life. Schools and their students serve the common good when they develop and use their talents in loving service to others. The attainment of both of these ends both requires and then ultimately ensures human freedom.

The students’ final good — union with God in heaven — requires them to exercise their own individual religious freedom. God wants the students to freely choose Him and freely love Him. This is the ultimate high-stakes test for our students: the “final” for the final good. But they must freely answer the questions for themselves.

In a Catholic school, teachers present students with a comprehensive worldview that functions as an interpretive framework for evaluating all that is set before them. In their selection and presentation of critical materials and by their lived witness, teachers expose students to intellectual and moral standards and Catholic culture so as to provide a steady and valid basis for exploration of all that is real.

Following the example of the teachers, students learn to use their properly functioning senses and reason, along with the guidance of divine revelation to study reality, to assign value and meaning according to God’s natural plan, and to find God and to serve others.

Then comes the final and most important step. It is what Luigi Giussani calls “The Risk of Education.” The teachers invite the students to test, challenge and investigate the truth claims presented to them in the context of the students’ own lived experience. The risk is that despite the best efforts of the teachers and schools, students may still ultimately reject the truths and realities set before them. Education requires and empowers human freedom, which entails both risk and consequence.

This educational paradigm is a microcosm of the freedom that God gives all of humanity to accept or reject Him. As the teacher presents and models an understanding of reality for his or her students to accept or reject, so the Church presents and models an understanding of reality for society to accept or reject. And while the nature of freedom necessitates that the teachings of the Church can be rejected, the nature of freedom also necessitates that they are heard and not silenced out of hand.

As a civic society, we must ensure that the voice of religion on all questions concerning the nature of man is not silenced by our government nor drowned out by a hostile secular culture. We have a competing vision of the good and of the human person that we must be able to present to our children and to the culture. This includes a vision of the nature and purpose of human sexuality, the relationship between the soul and body, and the relationship of the mind to reality.

Until recently this vision of the human person was the foundation of Western society. It was based on a metaphysics which protected the individual and human dignity from the powerful by holding that the nature and truths of the human person are given and secured by a loving God. We must retain our freedom to offer such truth claims in the public square.

One way we do this is through our Catholic schools. They need to retain their freedom to speak the full truth of man to their students. They must be free to employ only those who support this view in both word and action, since students learn more by sincere example than by words.

Catholic schools are at the forefront of the battle for both individual and civic religious freedom. The Church opens and runs schools primarily for its evangelical ends: to spread gospel freedom and grow the Church. As evangelical institutions focused on critically evaluating culture and transmitting a Catholic culture focused on truth, beauty and goodness, it should come as no surprise that the current popular culture and the civic culture it inspires should find Catholics’ efforts out of sync with theirs.

Catholic schools have a different understanding of the nature of freedom, the nature of the human person and the very nature of truth. These are not conflicts about inconsequential matters; this is the big stuff. Catholic schools should expect the popular and civic arms of our rapidly disintegrating culture to fight them and seek to silence them. Anything less would be, frankly, insulting and suggest that their efforts were ineffectual.