Trending Now
You are at:Home»Featured»The Importance of a Manly and Christian Friendship
By Michael Lane on October 23, 2014 Featured, Live in Christ, Men 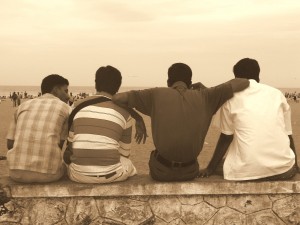 Facebook promotes a very odd concept of ’knowing’ someone, and it has led to the further warping of our sense of friendship.

My experience, like many of you, has been a passing meeting with someone leads to a friend request. But, we are not friends. We are barely acquaintances and yet we claim to know each other enough to claim friendship publically. Timelines, photos, relationship statuses, family, quotes, favorite movies, favorite TV shows, status updates, religious views, and more. A person encapsulated and reduced to a webpage but ready to be ’known’. And, should you de-friend someone you could just as easily be publicly slapping them or deeply wounding them.

I do not wish to overstate Facebook’s effect on our society, but more than a time or two, I have been asked why I did not accept a friend request in a way that said I was rejecting them as a person. This, I think, meager excuse for friendship reflects how far friendship has fallen in society.

Truth as We See it

As men, we desire companionship of fellow men after our own hearts. As C.S. Lewis wrote in The Four Loves, friendship may not be a biological necessity for survival, but as long as men have walked the earth, we men have known we need to do things together.

Long before history began we men have got together apart from women and done things. We had to. And to like doing what must be done is a characteristic that has survival value. We not only had to do things, we had to talk about them…We enjoyed one another’s society greatly: we Braves, we hunters, all bound together by shared skill, shared dangers and hardships, esoteric jokes – apart from women and children.

Friendship, then, arises when companions of two or more delight in the discovery ”that they have in common some insight or interest” that others do not share and ”till that moment, each believed to be his own unique treasure (or burden).” Shared interest begins a journey to the sharing of something more. Love.

”Do you love me?” means, to Lewis, ”Do you see the same truth as me?” Agreement in the answer is not as vital as seeing the importance of searching for the answer to the question. I might not agree with another\’s concept of how best to follow God\’s will but we agree His will should be followed.

Friendship in our culture has been degraded and diluted to base activities. There is little that calls us to a deeper, more intimate connection with our brothers. As casually as we toss around the word \’love\’ we label men, whose surnames and beliefs are unknown to us, as our ’friends’.

In a desire to give offense to no one by calling day-old-acquaintances friends, we offend the very nature and beauty of friendship. By not going deeper our ‘friends’ become the people who give us satisfaction in one form or another rather taking satisfaction in the friendship itself — a selfish, prideful relationship rather than a fellowship of travelers sojourning on a quest to find an answer each friend seeks.

Lewis is bold enough to argue that friendship can never arise from a desire only for a friend without a thought of truth. I agree. Skimboarding is not scuba diving. The first might be fun and exhilarating but is fleeting. The second is an adventure into depths unknown requiring time, trust, and testing.

Friendship in a Man’s Christian Life

For Catholic men, the same truth, regardless of other differences, is Christ and His example. Blessed Cardinal Newman wrote in his sermon Love of Relations and Friends that our practice of loving our private friends prepares us to love all men truly rather than superficially. If a man cannot love his friends as Christ did His, how can he claim any sort of general love for mankind? Newman said of Christ and His friendship with St. John,

Yet we find our Savior had a private friend; and this shows us, first, how entirely He was a man, as much as any of us, in His wants and feelings; and next, that there is nothing contrary to the spirit of the Gospel, nothing inconsistent with the fullness of Christian love, in having our affections directed in an especial way towards certain objects, towards those whom the circumstances of our past life, or some peculiarities of character, have endeared to us.

Christ Himself then walked in a special way with one of the Twelve, but in no way did this denigrate His friendship with Peter or James or the rest.

I have heard often others speak of the need include each and every person in the group to make all feel included. The desire is good, but the practicalities of searching out kindred spirits and our brief interval upon Earth renders real, developed friendships with all impossible. But, a fellowship of devotion, love, and sacrifice is entirely possible as our Lord showed.

Friendship, as Lewis argued, takes on the nature and characteristics of the friends and the truth they seek. Friendship may inspire the good to better or corrupt the bad to worse. Newman wrote,

But what is it that can bind two friends together in intimate converse for a course of years, but the participation in something that is Unchangeable and essentially Good, and what is this but religion? Religious tastes alone are unalterable. The Saints of God continue in one way, while the fashions of the world change; and a faithful indestructible friendship may thus be a test of the parties, so loving each other, having the love of God seated deep in their hearts. Not an infallible test certainly;…However, under certain circumstances, it is a lively token of the presence of divine grace in them.

Practicing Catholic men inspire one another toward virtue. Men who befriend fellow pilgrims along the way have others who may encourage each other in times of trial, celebrate their triumphs, and continue the journey together. Should they meet others along the way jealousy ought not appear among true friends for each friend brings out something special and unique in the others.

Lewis wrote, ”By myself I am not large enough to call the whole man into activity; I want other lights than my own to show all his facets. Now that Charles is dead, I shall never see Ronald [Tolkien’s] reaction to a specific Caroline joke. Far from having more of Ronald…I have less.”

I still hold to something my parents once told me. You will be judged by the company you keep. Today, I keep the important portion. Judgement is based on the logical assumption that the men around you bring out those virtues or vices most associated with the group’s characteristics and dynamic.

Colin Duriez’s Tolkien and C.S. Lewis: The Gift of Friendship asserts that without each other, and the other Inklings, Tolkien and Lewis may never have written The Lord of the Rings or The Chronicles of Narnia. Each brought out something in the other through their mutual interests, shared Christian faith, and constant support and encouragement.

Friendship is Essential for Men

Friendship, as Lewis wrote, is not biologically necessary for survival but, ”like philosophy, like art, like the universe itself (for God did not need to create)…it is one of those things which give value to survival.” Sirach 6:14-17 tells us what great treasures our friends are when the friendship is guided by fear of The Lord ”for as he is, so is his neighbor also.”

Whatever the future has in store for me, I trust in God’s grace to help me achieve what His will desires. But, I know that in humility I might achieve more with my brothers than I could ever achieve alone. Our natural instincts towards communal works, shared hardships and sacrifices, and mundane activities like team sports speak of our natural tendency to work with our fellow men for some higher goal.

As Catholic men, we have two goals: Heaven, and to do what we can for as long as we can to make this world better. In addition, these are not simply goals like some sort of five year plan. These are what we are called to by our Catholic faith and the universal call to holiness. We are called to be saints.

Facebook details will tell you nothing of a man’s worth or whether he might be a kindred spirit. Age, hometown, hobbies, and the like are learned on the way and count for little when compared to the truth friends seek together.

Lewis said it well enough, ”you will not find the warrior, the poet, the philosopher or the Christian by staring in his eyes…: better fight beside him, read with him, argue with him, pray with him.” These are the ways we both discover where the heart of a man lies and form a life lasting bond.

In closing, Lewis called for friendships to look more towards the ancients and their practice. Men like Jonathan and David, Cicero, Aristotle and the like who saw friendship as bringing out the best, or worst, in men. The true BFFs, as it were.

A portion of Alfred Lord Tennyson’s Ulysses seems appropriate. At least, it stirs a man’s heart for what he may achieve with his brothers.

Come, my friends,
’T is not too late to seek a newer world.
Push off, and sitting well in order smite
The sounding furrows; for my purpose holds
To sail beyond the sunset, and the baths
Of all the western stars, until I die.
It may be that the gulfs will wash us down:
It may be we shall touch the Happy Isles,
And see the great Achilles, whom we knew.
Tho’ much is taken, much abides; and tho\’
We are not now that strength which in old days
Moved earth and heaven, that which we are, we are;
One equal temper of heroic hearts,
Made weak by time and fate, but strong in will
To strive, to seek, to find, and not to yield.