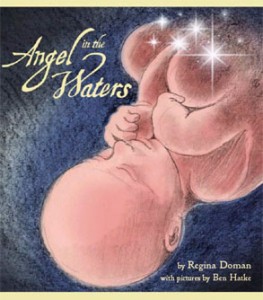 As Respect Life Month this year approaches its close, it is appropriate to give notice to one of the enduring classics of the pro-life movement. It is not a learned tome on personhood, or a carefully reasoned argument about the flaws of abortion case law, or a guide to effective pro-life activism, important as all these topics are. This book is more subtle yet more immediately accessible to the average reader, including children.

The author is not a well-known public voice for pro-lifers, though she has influenced hundreds of thousands with the most basic life message. I refer to Regina Doman, who deserves recognition for helping advance the pro-life message through her bestselling Angel in the Waters, a children’s book about a baby growing both biologically as well as spiritually in a mother’s womb. First issued in 2004, it has been re-released as a 10th anniversary hardback by Sophia Institute Press.

What makes the book both enduring and endearing for an entire decade? For one, the baby always appears on its pages as a human person, a fragile life with a soul and a heartbeat, aware early and often to sensory realities in the surrounding womb. Soft-colored, strong-lined illustrations by Ben Hatke allow the reader to catch with the child the muffled sounds of mom and dad echoing in the darkness.

Hunger is felt in terms of a soul searching for answers as much as stomach in development, both calling for constant confirmation. The book also shows physical movements within waves of amniotic fluid to reveal an essential fact of prenatal activity: the world gets smaller as the baby grows bigger and prepares for life outside the womb.

Another fact revealed is how the time to term and beyond isn’t without its trials. Moments of infant insecurity and doubt emerge, notably at times of an unknowing silence. Yet it is those same silences that bring with it new knowledge and comforting love.

After the baby asks shortly before birth about how he will know the guardian angel is still near, the angel says: “When you are quiet, you will know.” It is dialogue that reminds readers of heaven, the “bigger world outside this one.”

There is also the sense of sudden solitude immediately after birth, an absence of an all-encompassing warmth of the womb and, importantly, the comforting voice of an angelic presence. The reader accompanies the baby as he literally cries out for the guardian angel in his earliest days, until assured by the angel declaring right before the baby falls asleep: “I will always be with you.”

Even a decade later Angel is the Waters has a message and material surely sturdy enough to share for decades of bedtimes to come. It affirms that a proper place exists for the children’s literature in the pro-life movement. It also reassures readers of a truth often absent today in our understanding of human life: how a divine presence sails along with each of us, accompanying us for every single wave along the waters of life.