Trending Now
You are at:Home»Featured»“You are Trying to Kill Me”
By Bill Donaghy on May 19, 2014 Featured, Live in Christ 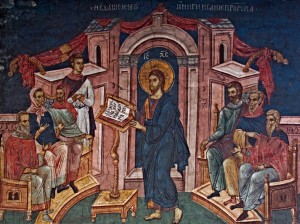 I’ve always been fascinated by the two extreme reactions of people towards Jesus: adoration or desecration. Absolute wonder and awe that sought only to touch his hands or a blinding rage-filled hate that would drive a nail through them.

I’ve been following the Sr. Jane Dominic ordeal with a similar fascination. This dear sister came and proclaimed a truth about human sexuality in light of the plan of God for our joy. It was a young audience at Charlotte Catholic High School and time was very limited for such an intense topic.

Granted, it needed time to breathe, time for questions and exploration, and that’s been acknowledged. But a truth was spoken. And like the finger of a physician it touched a wound, and an angry body had a knee-jerk reaction.

According to the comments and the news reports, no one seemed interested in the veracity of the studies Sr. Jane cited regarding the homosexual lifestyle. No one wanted a discussion and/or revelation that would have treated that wound or sought to address it at a subsequent meeting. They seemed only interested in silencing this Catholic nun, and letting it be known that they felt (they felt) that the Church should change it’s teaching.

I found it so providential that the first reading at Mass later that week (after the mob at CCHS) was from Wisdom 2:

To us he is the censure of our thoughts;
merely to see him is a hardship for us,
Because his life is not like that of others,
and different are his ways.
He judges us debased;
he holds aloof from our paths as from things impure.
He calls blest the destiny of the just
and boasts that God is his Father.

Just something to consider in this whole debate, this whole decision about speaking, teaching, living the Catholic faith in its fullness: If we want to really love Jesus, this shocking Jesus who could “bash” Pharisees and bedazzle prostitutes, trash temple money-changers and touch tenderly the blistered wounds of beggars, then what happened to Jesus must necessarily happen to us.

“If the world hates you, realize that it hated me first… If they persecuted me, they will also persecute you…” – John 15:18-20