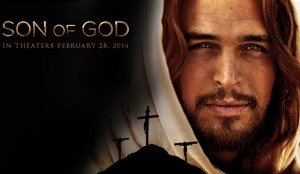 It’s not often an epic film on the life of Christ hits the Big Screen. In fact, exploring the canon of great American cinema brings two features to mind: Martin Scorcese’s The Last Temptation of Christ and Mel Gibson’s The Passion of the Christ.

Now, of course the latter was more biblically sound and visually moving, while the former drew controversy and still rankles many of those who are well-formed in their faith. However, there is something to be said for the provocative picture that brought Martin Scorcese a well-deserved Oscar nomination even if Willem Dafoe was snubbed. The brass Mel Gibson should have won is, of course, an entirely other article.

This year, we have something pretty cool: a third full-length feature on Jesus Christ entitled Son of God from Bible Series producers Mark Burnett (The Voice, Survivor, The Apprentice) and his wife Roma Downey (Touched by an Angel) opening the same weekend as the Academy Awards will air. When our Lord and Savior is the subject of a great film, should we expect any less?

Visible mark of Divine Providence or reading a bit too much in the tea leaves? I’ll leave that to you to decide. For me, it’s just one of those really cool instances where for a moment, it all just makes sense. Why would Hollywood not explore such an amazing topic more often? Consider how many films tackling the subject of the Vietnam War or the superhero du jour? The story of Christ looms larger than all those combined.

Readying ourselves to see Son of God this weekend, my wife and I are truly excited because it’s going to be more than a film, it’ll be an event. This is one of those beautiful pieces of cinema that has to be seen on the Big Screen in order to do it justice. Years from now, audiences will look back on this epic film as being almost a “sequel” of sorts to the last major blockbuster on Jesus, Gibson’s Passion–not only in terms of the beauty and grandeur but also in its success.

Considering I saw that epic work in the theater and it exceeded all expectations of those around me, I’m glad I’ve already got my tickets for Friday night. Do you?