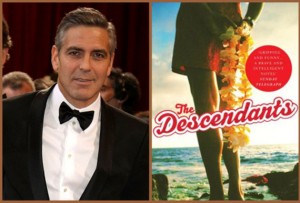 I came to bury Caesar, not to praise him, and wound up praising him. I had my skewers ready and planned to make shish-kabob out of this film. But I cannot. Why was I all set to hate on this film? I thought it was “Just Another Sad Tale of a Dysfunctional Family Where Dad Is Once Again Emasculated And For That We’re Going To Give It An Oscar.” I thought the title was super-lame as well. It sounded like “Just Couldn’t Think of Another Word For ‘Family,’ So Used Thesarus.com And Chose The First One.” That’s not true either. The title is totally appropriate.

Since the trailer already gave away a key revealing plot-point (bad trailer! bad trailer!)—well, actually it gave away the “inciting incident” that kicks off the action—so will I. The Descendants is about a cuckolded husband, Matt King (George Clooney). It’s all about that. Except his wife is in a coma when he finds out. My fellow-screenwriting buddy insists that there is no arc for Matt, but I think there is. (Writer/director Alexander Payne does not have huge arcs for his characters, much like life. They tend to budge just a little bit.) Clooney’s character must choose how he will now feel about his wife (he can’t deal with her), and how he will deal with her lover. It’s a story of the choices surrounding forgiveness. Who will we forgive? When? How? Why?

It’s clear that Matt was a neglectful husband and father, having been married to his work as a real estate lawyer. He seems to have a closer relationship with his rebellious teenage daughter, Alexandra (the amazing Shailene Woodley) than his precocious ten-year-old daughter, Scottie (the ever-so-natural Amara Miller), which seems to indicate that his distancing was a gradual thing. But his wife’s accident (that induced the coma) woke him up to his sorry state of affairs (pun intended) and he is doing his darndest to be a good parent now. However, dear old Dad vacillates between being a wuss and sticking up for his affronted manhood (which includes appropriating his paternal authority), in many different ways.

This movie is incredibly tender (amongst all the brattiness and foul language). It is a real Theology of the Body movie (with reservations) in more ways than one. First of all, Matt’s wife, Elizabeth, is in a coma for the entire movie—lying there in her hospital bed. And everyone talks to her because it’s her and everyone knows that. Elizabeth is her body; her body is Elizabeth—right till one of the closing shots (don’t wanna spoil it).

Marriage is sacred in “The Descendants.” To be unfaithful is a terrible, terrible thing. (The teenage daughter gets this in a big way, too.) However, one might argue that “love” is treated as something more to do with feelings. For example, it’s very important to the characters if someone really loves someone else (whether or not they’re having a fling with them). But love and marriage are more than these deep-seated, je ne sais quoi feelings. What if one really, really loved more than one person? Should marriage then be open? What about polyamory? Polygamy? And yet, since we—particularly in the West—have adopted the romantic love version of marriage for centuries now, the question of choosing one person based on attraction/admiration and how that plays out is a very legitimate concern. Thornton Wilder’s play Our Town, and Blessed John Paul II’s Love and Responsibility come in very handy here!

Matt is unselfish enough to want to follow what he believes Elizabeth “would have wanted.” But, what if the one you love wants things that aren’t right?

Smarmy teens that know more than the parents? Check! But Dad engages richly with his teen daughter who really does love her dad. Cussing teens (and kids)? Check! But I’m afraid that’s the reality in many, many families today.

Not a movie for teens, methinks. The message is: The teens are in control. You will get what you want (from your parents) in the end. We are living in post-parental-authority times. And not only that. The clear message is: You can be as wild as you want as a teenager. You’re supposed to be bad. Do anything you want. Drinking, drugs (not too many hints at teen sex). Nothing bad will happen to you. You will outgrow it unscathed. (Bad things only happen to parents and adults!)

I have problems with virtually naked teenage girls in barely-there string bikinis in films. I know that’s Hawaii (see also “Soul Surfer”), but there’s a huge difference between walking by (or even ogling) half-naked girls at a beach setting (still uncomfortable with that) and prolonged, voyeuristic gazing at a larger-than-life screen. True, these gals are rail thin (that’s another issue), but what makes it sooo creepy is how young they are. Like, hey, filmmaker, what’s your point here? (Would also like guys to weigh in here…??)

In this film, everyone is treated as a full-blown person. No one is one-dimensional. No one is just a problem or an obstacle or a story device or a cheap laugh. Even the children and teens. Even side characters with one line (e.g., teenage kid who expresses his heartfelt compassion for Matt at a gathering). There is a tremendous recognition of human dignity here.

I completely forgot who the director was until the credits, and I see Alexander Payne (UCLA grad, I might add, my screenwriting alma mater). He did Election, About Schmidt, and Sideways. I had been thinking, “Who the heck is doing all these unblinking-but-not-uncomfortable, exact, exact, precise, precise, impeccable scenes?” And I just broke out in this big smile because it was Alexander Payne. He has a much brighter view of humanity now! But he has retained all his dark humor and distinct style. Maybe he was practicing with all those other films, just like I believe Terrence Malick was practicing for Tree of Life.

In conclusion? Give this movie all the Oscars you want.