Trending Now
You are at:Home»Arts, Leisure & Culture»On TV and Movies»Who is Simon Miller? Worth a Look Tonight
By Mary Kochan on August 6, 2011 On TV and Movies 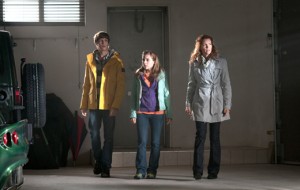 My first exposure to Procter and Gambles’ and Wal-Mart’s Family Movie Night program was Secrets of the Mountain a Nancy Drew-type story, billed as an action/adventure film, with the protagonists a divorced mother and her three children instead of a teenaged detective and her friends. The basic theme was of a family drawn together by shared, if predictable, dangers — I mean, don’t you already know that when television characters go underground the obligatory cave-in and just-in-time rescue are mere minutes away? But given the general state of the fare on commercial television, the very innocuousness of the movie seemed enough to recommend it.

I wouldn’t say the same about the second Family Movie Night film I saw — Truth be Told — ostensibly a comedy based on mistaken identity, in this case mistaking someone single for someone married, with the person then deciding to adopt the married identity as a ruse. “Implausible” does not even do justice to the characters (especially the kids;  no, the rancher; no, the kids), nor “contrived” to the plot, which could only have succeeded by entering fully into farce, but which tried instead, painfully, for moral seriousness.  Real genre: annoying.

In all fairness, there have been six Family Movie Night movies shown so far, but having only seen the above-mentioned two before previewing tonight’s offering, Who is Simon Miller? and given their uneven quality, my expectations were low. But Who is Simon Miller? surprised with what seemed to be a solid step up and the only one of the bunch so far that crosses into the genre of the international spy thriller.

Who is Simon Miller? captivates quickly, beginning with a chase scene, and moving through twists and turns of intrigue, without becoming too labyrinthine for tweens and younger teens to follow.  There is the by now seemingly obligatory “moral”: families should stick together and trust each other. But while it is tiresome that this is about as deep as family TV and movie fare seems to reach anymore, there is certainly no harm in the message.  It will be up to parents, using family viewing as a springboard for conversation, to give greater significance to the take-aways from this film.

Who is Simon Miller? may be your teens’ introduction to the international spy thriller genre of books and movies. Tom Clancy is mentioned in the film and it may spark interest in his novels.  This entire genre is not only entertaining, but educational as well. Given the poverty of historical education in this country, we really need to fight our collective social amnesia about the Cold War and the great battle against Communism.

Older teens might be engaged in questions about the legitimacy of clandestine operations mounted on the exclusive say so of the executive branch of our government – an issue with great currency. They might also be inclined to explore how realistic the ending of the film and its implications for the family’s future are. Given that there is something of value here to mine and that the film contains nothing objectionable in the way of violence or sexual content, Who is Simon Miller? gets a qualified recommendation for family viewing. If your family is going to watch any commercial television together tonight, it is probably going to be your most enjoyable bet. It airs at 8 (7 Central) on NBC.

Having said that, I want to address something that bugs me, going all the way back to Nancy Drew and the Hardy Boys and that is followed through on so much “family fare” television and movies: that is the issue of obedience. Frequently the plots of these stories are moved forward positively by some act of disobedience on the part of the kids to either the parents or to some other authority figure, like a police officer or governmental official. The kids in the story are told to stay put, to allow the adults or experts to do the investigating or rescuing and time after time, the kids are portrayed as disobeying these direct orders and usually with successful results: the kids succeed where the adults either fail or would have failed without their assistance. In real life, of course, the direct disobedience of teens and younger children to the directives of parents and other authorities almost always leads to deleterious consequences ranging from the minor to the very serious, even deadly.

Obedience is great virtue; years ago it received some stress, especially within literature written for youths. In recent memory the only film that gave it positive press was The Incredibles. It would be refreshing to see a Family Movie Night offering that did the same.

Another great virtue is that of piety – something else absent from almost all so-called family movies in recent years. Instead family members go missing, or come into serious danger, and nobody prays, nobody even mentions praying. Hollywood really just seems blind to what an ordinary thing calling on God is for most American families and for most individuals in any dangerous or stressful situation.

The result of these lapses is characters who just don’t seem normal. While not joining the race to the bottom and appealing to the lowest common denominator, as so much of TV does, makes this family fare welcome, they still have a long way to go.  So enjoy Who is Simon Miller? but keep hoping that Hollywood’s family fare will take us into some real adventures – like that of a young soul resisting temptation to disobedience, or a family opting for faith over despair in the face of anguish – the kind of adventures real American families have every day.